An intelligent mind once said, "if I can touch your system, then it's not your system." This phrase shaped the way I approached security, and increased my paranoia.

Although many guides exist that describe full disk encryption, they unfortunately fall a bit short of the claim and leave a bit too much unencrypted data available to be tampered with. Fortunately, GRUB2 makes near-full disk encryption very easy, it just takes a few extra steps.

The most common method of full(ish) disk encryption is "Encrypted LVM." This approach, and many others, often use a separate /boot which is used to handle decryption.

When /boot is left unencrypted and secureboot is disabled, an attacker (Evil Maid) is able to edit configuration files (grub.cfg), insert boot options, or replace an entire initrd/initramfs image with one containing malicious code.

Depending on distro of choice, hardware, and BIOS, secureboot might be available. With secure boot, it can be possible to detect changes to initramfs, but this doesn't mean the boot process can't be manipulated via boot parameters or other methods.

Although it's currently imposible to encrypt the MBR, everything else can be encrypted pretty easily. This guide is all about using a single encrypted partitions filling the entire disk.

The process provided here is based on the Debian installer. From the boot menu, choose "Advanced options" and then "Expert installation." Despite the name, this installation method is quite easy, it just provides more flexibility.

This process requires GRUB and generates an MBR that is too large to fit in the standard 512 byte space. Newer partioning tools usually leave a large space before the first partition to accomodate this problem, however, this is largely dependent on the installer. It is much safer to follow a manual partitioning process.

To manually configure the partition table:

Once partitioned, the remaining steps will take place from the installer:

[1] This usually means the installer was started in EFI-mode.

The final result should look similar to this: 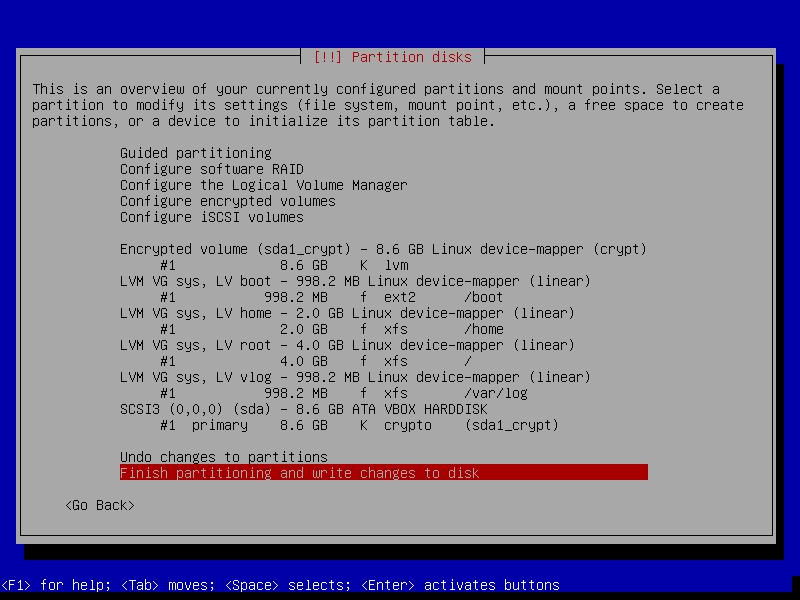 Newer versions of cryptsetup will generate encrypted volumes using Version 2 headers. These headers are not currently supported by GRUB and need to be downgraded.

After the step: "Install the GRUB boot loader on a hard disk":

In addition to downgrading the header, GRUB's MBR needs some extra modules:

Although not related to disk encryption, this is an excellent opportunity to remove the insanity that SystemD brings with it.

For reasons I have not yet been able to identify, GRUB installation rarely works with this configuration the first time through. If the newly installed system can't be booted because the MBR can't be found or because "error: disk 'lvmid/xyz' not found," run these steps to fix the problem.

During boot, the disk will need to be unlocked twice. The first decryption will make /boot available for grub to boot from. The second will be used to mount the root file system and boot. It's important to note that the first password will be entered using the hardware's default keyboard layout; the second will be entered using the OS-configured keyboard layout.

It's possible to embed a decryption key into initramfs so that the key only needs to be entered once, but this has significant security implications and is strongly discouraged. This setup is explained in good detail in Step 4 (Avoiding the extra password prompt) on a Debian cryptsetup page.

When GRUB supports LUKSv2, the key will be able to be stored entirely within the kernel, which will prevent a lot of potential security problems. Once this becomes available, it will be worth migrating to.